Stompin' Mad Bats is a Psychobilly band from the faraway "Mad Planet of the Bats". They landed on planet Earth, in Italy, in 1989, thanks to Alex, a passioned guy who stepped into Psychobilly music across the Galaxy and started to play double bass near Modena, Italy. Soon, together with Paolo on vocals and Tino on drums they gave life to the band. in 1990, they enlisted Teo on guitar and in 1991 they recorded their first demotape including 4 songs. In 1992, Duo' joined the band as rhythm guitar and Stompin' Mad bats started to play more often across Italy, writing a good amount of songs and material that would have been included in their setlist. In the same period, the Stompin' Mad Bats organization, wanted by Alex, also bought to Italy a lot of bands as Batmobile, demented are Go, Klingonz, Long Tall Texans, Scum Rats, Peacocks, who helped on spreading the Psychobilly music across Italy. SMB also became friends with all those international bands and Demented Are Go suggested to the most known UK labels "Fury Records" and "Nervous Records" to give the guys a chance. 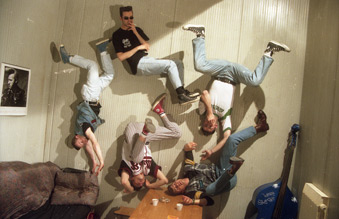 The LP and fab Period

In Spring 1993, Stompin' Mad Bats went to a recording studio working on their debut album, after a positive agreement with the mentioned labels which also invited the band to play at the 6th Big Rumble in Great Yarmouth, UK. The festival, which included the Gotha of worldwide Psychobilly bands has been their debut in the international scene, they've been claimed as one of the real new interesting bands coming out from the fog. It was an unforgettable weekend, where the band threw a 3 days non-stop party in their caravan where all bands and people regularly joined the party and gave their contribution to a new meaning of "endless party". In the same days, Dell Richardson and Roy Williams, chairmans of Fury/Nervous Records, signed the contract for Stompin' Mad Bats debut Album, that in the meantime was completed and 2 songs: "Angry Noises" (included in the "Rumble Party Vol 2" album, Fury/Nervous records, 1993) and "The Taste of Sin" (lately included in "the Best of Fury Psychobilly" CD Compilation, Fury records 1998) started to invade the psychobilly scene all across the world, rising numerous approvals from people from Japan to United States. In 1994, the band splitted up due to some internal problems.

But... the album was ready and never been released. So... 24 years later, Alex decided that it has to be released. That's why he get in touch again with Paolo, Duo' and Teo and they started to work on the final and official release. They contacted Fabio, the sound engineer who recorded their album in 1993, and they mastered the original tracks. An now... 24 Years later... "Angry Noises" is finally out. Come and join the "mad sound" that made Stompin' Mad Bats album one of the most awaited releases, claimed in decades by people from all around the world!